FOR A SMOOTH RIDE – AAA Magazine 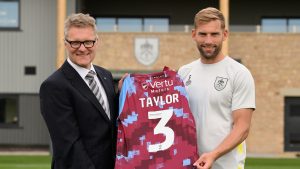 The dealer group’s logo will appear on the back of the club’s three shirts for the duration of the season, and the partnership will also see branding appear around the Turf Moor stadium.

This will include pitch-side advertising. Papa John’s FanZone activities, matchday sponsorship, and player appearances are also included, in addition to various hospitality opportunities.

Vertu is hoping to boost community ties to its Land Rover dealership in Nelson, just four miles north of Burnley, plus five other dealership locations nearby across Bolton, Skipton and Bradford.

Robert Forrester, chief Executive of Vertu Motors, said: “Having been a fan of Burnley Football Club for many years, I am delighted that Vertu Motors has become an official partner.

“Vertu Motors already has a good local presence in the surrounding area, and we are pleased to continue increasing awareness of our brand and what it has to offer.

“It should be an exciting time for Clarets supporters, under the stewardship of new manager Vincent Kompany, and we are really proud to be part of the club’s journey.”

Gordon Kaye, Burnley Football Club’s commercial director said: “As a club, we are passionate about working with national businesses that have a connection to the local community; I’m pleased to welcome Vertu Motors onboard.

“We have an exciting campaign ahead of us, both on and off the pitch here at Burnley FC, which will offer plenty of opportunities to develop the partnership, through various initiatives and activations.

Vertu Motors also holds a partnership with the Professional Footballers’ Association for the PFA Vertu Motors Fans’ Player of the Month Award, which will run throughout the 2022/23 season, and Karen Carney was named a Brand Ambassador earlier this year.