In July of 1958, the fortunes of International Harvester changed forever. Starting on July 18, the New World of Power show at the IH Testing Farm in Hinsdale, Illinois, a whole new line of tractors debuted. It was a huge event attended by representatives of the 12,000 North American IH dealers and dealers from at least 25 other countries. While literally hundreds of pieces of equipment were displayed, the stars were the new 460 and 560 models which featured International’s new line of six cylinder engines.

In the diesel realm, there were two new sixes, the D236 and the D282, both built on the same architecture. The development of these engines had started in 1956 and they were based upon the successful Black Diamond OHV gassers that had debuted after WWII. The development was designed to be spread to all divisions of IH, so within this six-cylinder diesel family, there were basically four engines divided into two stroke categories, a short 3.69-inch stroke and a long 4.39-inch. From there, the tractor and many industrial engines were sleeved to a 3.69 inch bore. Some industrial/agricultural and the motor truck diesels were parent bore (unsleeved) at 3.81-inches.

The original concept was to debut the new six-cylinder tractors as the 360 and 460 to replace the 350 and 450 models, the latest iterations of the four-cylinder lines. Apparently, that wasn’t whiz-bang enough, so they became the 460 and 560. The 460 came in several models, the Utility (gas or diesel) which featured a set back front axle with an adjustable track, the Industrial (yellow paint, heavy-duty fixed tread front axle), Farmall (rowcrop with narrow or set-forward adjustable front axle, 3-point and other row crop features), Orchard (protective fenders only), Grove (protective fenders, cowling and low seating position), Hi-Clearance (4.3 inches of extra clearance) and a Wheatland (platform seating with full fenders and a set back axle).

Engine choices included the aforementioned D236 diesel, the C221 gasoline and a LPG fueled, high compression C221. The base gearbox was a 5-speed unit and optional (or included with the Farmall) was the Torque Amplifier (TA), which allowed the operator to split the gears without using the clutch. Standard equipment varied a lot according to the model, but the Farmall typically had a 3-point hitch, rear PTO and swinging drawbar. The Utility versions typically did not have the 3-point as standard but many are found with them.

Given it’s primary role as a utility model, a good number of attachments were available for the 460. These include the 2000 and 2001 loader (single or double acting cylinders) and the 65, 95 or 1250 backhoes. There were belly mowers and many other smaller attachments available as well from International’s vast array of implements. The 560 was of a size that made it adaptable to a lot of uses, both agricultural and commercial.

If you are a long-time reader of Tractor Talk you may remember our discussions about the issues with the final drives on the 460 and 560. The short version is that knowing arch-nemesis John Deere was coming out with a line of new six-cylinder tractors by 1960-ish, IH execs want to beat them to the draw and opted to cut corners, shorten the development time and graft the new, more powerful six-cylinder engines onto the previous generation final drives that were designed for four-cylinders. Engineering warned them but was overruled. Ironically, IH was well on the way to having new final drives developed and had they waited another year or so, they might have been available. It’s a great example of how short-sighted decisions can come back to take big chucks out of the corporate butt. 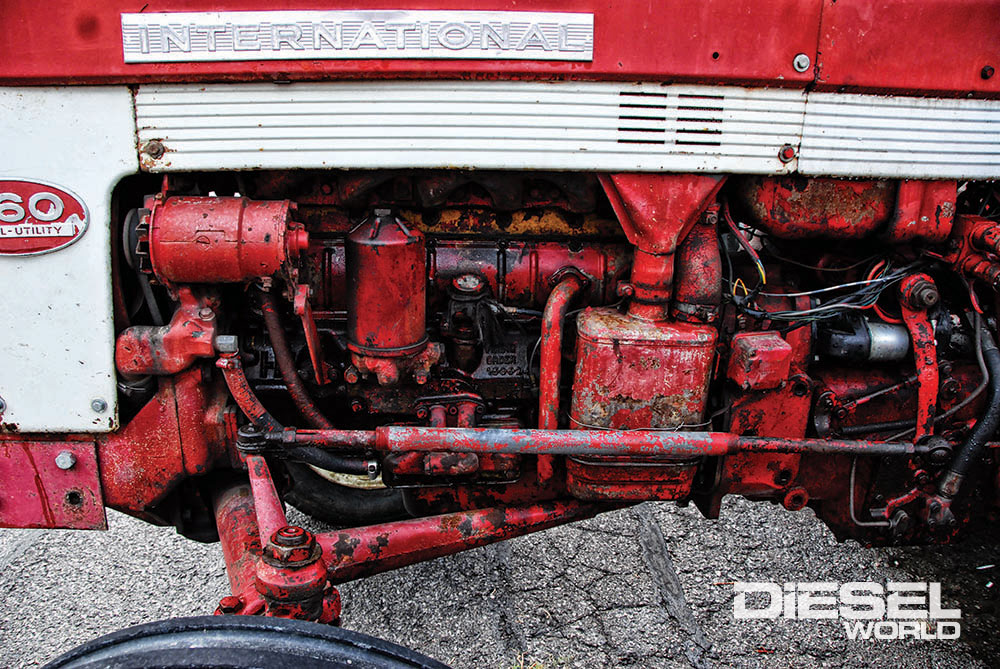 The new tractors were a hot commodity and they sold rapidly. As rapidly as they sold, so did reports about final drive failures. IH was slow to react and by the time they did, it had become a full-blown screaming emergency.  By the time they figured out how to fix the problem, both in production and out in the field, there were thousands of tractors out there with problems and thousands more waiting for them to happen. IH recalled and replaced some tractors, repaired others at the dealer under warranty and updated all the unsold stock. Deere took great glee in presenting pictures of the hastily set up regional repair facilities used to update the 460, 560 and 660 final drives. Though the tractors were adequate after the repairs, the reputational hit turned away many customers and gave Deere a sales edge that they maintained for the rest of International Harvester’s existence.

The 460 was on sale from 1958 into 1963. Sales numbers were decent considering, 11,410 Utility/Industrials of all types and 32,527 Farmalls from the start of production, June 16, 1958, to the end on May 3, 1963. Ignoring the final drive issues, which were largely solved by the end of 1960, the 460 Series were good tractors. They were at the top tier of the power scale in the era for a Utility-sized tractor and they had a plethora of options to fine tune them to an operation. Because them had less power than the 560 and used virtually the same final drive, they were a little less problematic in that area.

The 460 was replaced by the 606, which started production in December of 1961 and was considered to be the first of the legendary 06 line, the bulk of which debuted for 1963. In reality the 606 was little more than a slightly enhanced 460. The 606 line was only offered as a Utility or Industrial unit. The 460 Farmall model did not get a direct replacement, though the 504 (same production start as the 606 but with a big four) and the 706 Farmalls could be considered spiritual replacement above and below the same horsepower level.

Gmoney.eth Partners with Adidas and Prada for the Launch of NFTs

Nations to adopt Bitcoin, crypto users to reach 1B by 2023: Report