John Deere was just couple of years away from debuting a completely new line of tractors when they found a giant hole in their small agricultural tractor line. They didn’t have a small diesel tractor and most everyone else did, or would soon, and the New Generation models that would do that job, the 1010 and 2010, weren’t ready yet. Well, we’re playing that conundrum up a bit because Deere already had a viable answer to the problem they had recently used in their Industrial line, namely outsource an engine and update an older model. Sure, it was a stopgap, but it turned out to create a pair of good tractors.

JD had come up with the 440 ID industrial for 1958 and a year later, it served as a model for the 435 agricultural tractor. It was reportedly one of their first tractors designed from the ground up as a standard tread industrial. It was based on the 420 platform tractor, which had debuted for 1956 and also featured the improvements in the 430 series that replaced the 420 for 1958. The 430 can be considered a brother to the 435 ag tractor but the engine made them separate models. Because they didn’t have a small diesel available in-house at the time, they opted to buy them from GM, namely the 2-53 two-stroke. Not only was there a 440 ID wheeled tractor, there was a crawler version, the 440 ICD, “I” indicating industrial, “C” for crawler, and “D” for diesel.

The 440 industrial line was available in both gas and diesel, the gasser being an updated version of the 2-cylinder upright that had been introduced in the 420 for 1956. The 440 ID came standard with a 4-speed gearbox, but a 5-speed was optional as well as a shift-on the fly reverser. It had a heavy, fixed front axle so was suitable for a big loader, which was available factory or dealer installed from Deere, or various aftermarket units. Other standard features included power steering, 540 rpm PTO and a Cat 1 3-point hitch. Factory options included a belt pulley adapter for the PTO, the Model 71 loader and the Models 50 and 51 backhoe. Various tires and high-speed gearing were also on the options list.

The 440 line was built through 1960 to the tune of 21,928 units. Those numbers over just two years prove the unit was a hit and this spurred John Deere towards other Industrial models. The 440 didn’t have a direct replacement or evolution after it was discontinued but there were industrial versions of the 1010 and 2010 in the New Generation lines that debuted  for 1960. The 440 model number was recycled for a logging skidder that debuted in 1965. Once Deere had developed it’s own line of upright, inline diesels, the use of GM engines ceased. Like the ag model 435 we are about to talk about, the 440 is a very popular collector tractor these days.

The 435 emerged a year after it’s sibling the 440, which could be called “the brutha of anotha culla.” It shared the base powertrain of the 440, final drive and engines, but was set up for ag use. The 435 was a diesel model only, but nearly a twin in most respects to the 430, which was gas or LPG only and had debuted in 1958. Where the 430 had a plethora of variations, such as a narrow front axles, two high crop options and even a forklift option, the 435 came only as an adjustable wide front tractor and only with the diesel. It came standard with a swinging drawbar, PTO, 3-point hitch with depth control and fenders. Optional were a belt drive conversion for the PTO, power steering, five speed gearbox, improved seat, hydraulic remotes and high speed gearing.

The 435 had a relatively short run, only 4,526 units built from March of 1959 into February of 1960. It’s direct replacement was the 1010 New Generation tractor but there was very little carryover DNA. The 435 died here in the states but reappeared in Argentina as the 445 and manufactured from 1963 to 1970 by Deere’s plant in Rosario. Presumably, the 435 tooling was shipped over to accomplish this. The Deere 730 model got the same treatment and was built in Argentina in roughly the same period. 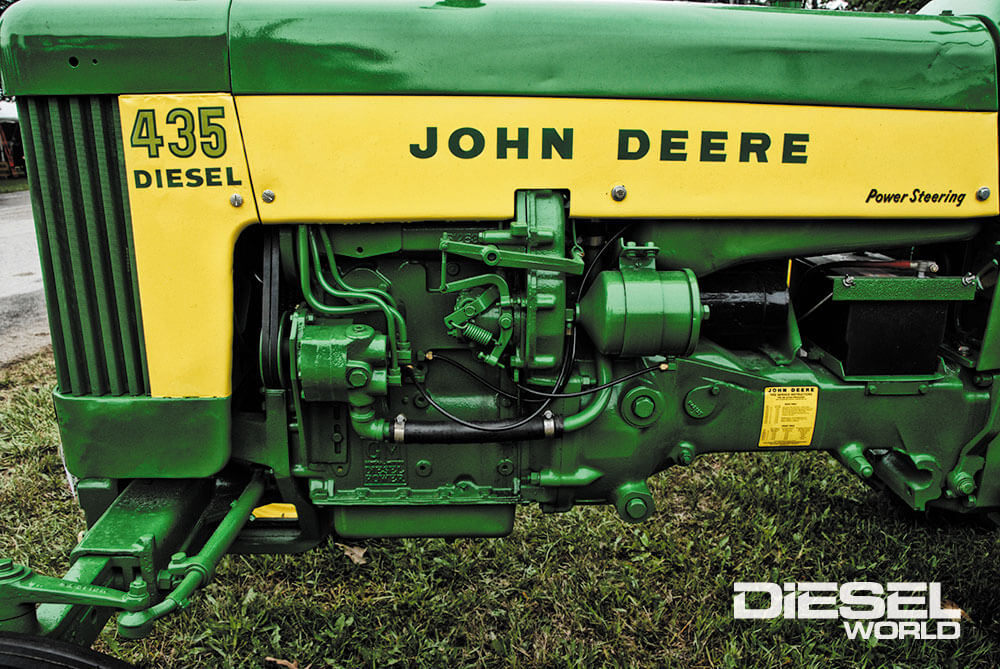 Being such a low production model that appeared at the end of the “Poppin’ Johnny” two-cylinder era, both the 435 and 440 have a lot of collector interest. History has also judged them worthy tractors… as long as you don’t mind that loud talkin’ Jimmy.

As Wormhole ‘unleashes’ Terra, a ‘cross-chain trade boom’ might ensue

AMC gets ‘hyperactive’ about crypto, CEO says it may issue its own coin